"It is not from the benevolence of the butcher, the brewer, or the baker that we expect our dinner, but from their regard to their own interest." Adam Smith

Although China hasn’t (yet) joined the Trans-Pacific Partnership (TPP), a trade deal between the U.S. and 11 pacific rim nations, she is already impacting current trade discussions in Washington, DC. Proponents on this side of the pacific are demanding the Obama administration to include a currency manipulation chapter in TPP to prevent countries (read: China) from manipulating exchange-rates to make their exports competitive vis-a-vis U.S. exports. They argue that currency manipulation is an indirect subsidy to foreign competitors, which hurts American exporters in the international market.

It is not unusual for countries to manage their exchange rate — the value of their currency relative to others — to make their exports cheap while making others’ exports to them more expensive. This method has been used extensively by, among others, China, Japan, Malaysia and Singapore — aside from China, all signatories to the partnership.

The American dollar is a prime target for these currency managers. First, the dollar is the global trading system’s premier reserve currency, meaning dollars are freely traded and confidently accepted by international investors. And Americans are a highly acquisitive people — a nice way of saying we buy a lot of stuff. Consumer spending as a share of gross domestic product is about 70 percent here, 55 percent in Europe and 35 percent in China. We’re steady customers for export-led economies.

There’s nothing wrong with that, until these exporters start buying dollars to raise the value of the dollar relative to their own currencies, thus subsidizing their exports and taxing their imports. In the United States, the result is persistent trade deficits that have been a drag on growth and jobs — better-than-average manufacturing jobs — for decades.

Is the renminbi really undervalued?

It is already difficult to successfully negotiate a trade deal, so adding a currency manipulation chapter will further complicate ongoing talks. It would also be unfair to blame rising U.S. trade deficit on currency manipulation, because there are other macroeconomic factors that can contribute to a country’s trade deficit. During the 1990s when the renminbi was highly “undervalued”, for example, the U.S. economy was doing exceptionally well even though annual trade deficits rose from $77 billion in 1991 to $455 billion in 2000. Moreover, the U.S. consumer-based economy pays for its imports with its large capital account surpluses thanks to its attractiveness to foreign investors such as China’s State Administration of Foreign Exchange (SAFE), the biggest foreign holder of U.S. Treasury debt.

It is not a secret that the renminbi is undervalued due to tight management by officials at the People’s Bank of China (PBOC). From 1995 to 2004 the renminbi was pegged to 8.28 yuan per dollar to prevent runaway inflation and facilitate trade, for example. After years of U.S. pressure, Beijing changed its exchange-rate regime in 2005 by pegging it, instead, to a basket of foreign currencies. Chinese authorities also allowed the currency to fluctuate within a small margin (see figure below). However, the 2008 financial crisis motivated the PBC, along with other central banks, to purchase safe-haven currencies (U.S. dollar, Swiss franc, etc.) which appreciated the dollar against the yuan. 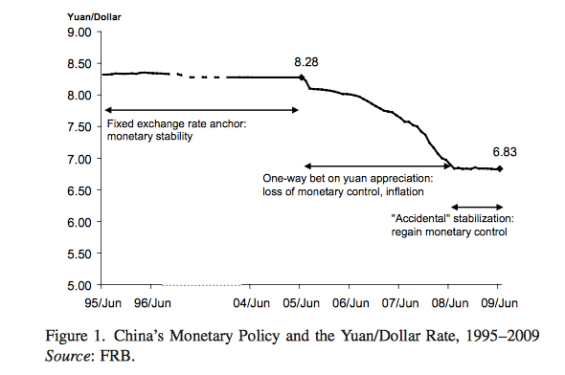 This is not the first time American stakeholders have pressured political leaders to do something about currency manipulation. The Reagan administration in the 1980s was harassed to persuade Japan and four other major economies to appreciate their currencies against the U.S. dollar, which culminated to the Plaza Accord of 1985. As a result, the dollar depreciated against the German mark, the French franc, and the Japanese yen. Fearing a continuing decline in capital inflow to the U.S., however, American officials begged G-5 members to slowdown the pace of the dollar decline.

Even if the renminbi is undervalued, it is a national economic policy matter rather than a trade issue. A country does not intervenes in the currency markets to mainly devalue its currency. It may be one of motivation, but it isn’t always the main one, especially in a highly integrated world where the value of a final product is determined by the prices of several inputs. For instance, Foxconn, like most Chinese exporters, have to import most input products for Apple products from several countries, therefore, an undervalued yuan is not necessarily the main objective of the PBOC.

Let China move at her own pace

After the 2008 financial crisis, the U.S. along with other OECD nations also intensified quantitative easing– long-term assets swaps– to boost economic output, which also depreciated the dollar against other currencies. Though, according to Bernstein, this isn’t currency manipulation, because the Fed doesn’t buy foreign currency. Well, why buy foreign currency when global trade is settled in U.S. dollars?

After the 2013 announcement of the China (Shanghai) Pilot Free Trade Zone to shift the economy into a domestic consumption and services, Chinese officials have already gotten the memo and are gradually implementing key monetary policy reforms. “The FTZ’s innovative system is a move toward establishing a market economy and integrating it with international rules,” said CCP Shanghai party boss, Han Zheng. Chinese officials have understood that an appreciation of the renminbi would help the country accomplish that goal by reducing exports, and a more flexible exchange-rate regime will provide the central bank with the flexibility needed to set domestic interest rates. Mr. Han added, “in the process, we need to give ample consideration to China’s characteristics, rather than simply copy from others.”

It is important to understand that part of China’s close management of its currency is also due to its history. Chinese officials are still afraid to float the yuan, and allow market forces to determine its value. They remember that hyperinflation contributed to the KMT fall in 1949. In addition, currency manipulation is a sensitive issue in China and other Asian countries, where people remember all too well the financial crisis of the late 1990s that shook this part of the world. Therefore, adding a currency manipulation chapter in TPP is going to stir up bad memories and further slowdown ongoing negotiations. It is interesting that those who oppose the inclusion of strict U.S. intellectual property rules in trade agreements are arguing for a strict monetary policy chapter in TPP. The U.S. has many (self-inflicted) competitiveness issues to fix in order to compete in the global market, but currency manipulation isn’t one.